Click Here to contribute to the Legal Fund for Justice for Michael Brown.

My father was a very political man. During the late 1960’s my father was the President of LOCAL 648 Brick Masons Union of Dallas, Texas. I was 10 years old in 1968 when Dr. Martin Luther King, Jr was assassinated.

My father watched the news as black people started burning down their own communities. There was no Internet, no Twitter, and no Facebook. But what my father had was the telephone number of every Union Member and every Political and Religious leader in Dallas. The Union Secretaries and Volunteers we in charge of the phone-tree!

Back then the telephones had rotary dials. Do you know how long it took to organize and get everyone down to the Union Hall? Soon, the place was standing room only.

I remember my father telling the crowd of leaders, to contact their family members and tell everyone to stay at home. He said: “We are not going to burn down the city we built like those stupid Negroes are doing up North and on the West Coast.” He instructed the police to go to South Dallas and parts of East Dallas where the majority were Black Americans. He told them to stand in corner streets and turn your radios on. He instructed Union Leaders to get their CB-Radios and walk the streets in those communities.

When my father noticed the fearful look on my face, my father lifted me up and sat me on top of a desk in his Union Hall’s office. He instructed the police to look at me and without fear my father said to me: “You see this man. He is a policeman. He is here to protect me and you. He works for us. You should never be afraid of him. Then he had me to shake the policeman’s hand.” The policeman smiled. I related the handshake and the smile to the many times I’d seen my father shake hands with a business person and when they both smiled it was a good thing.

Dallas did not experience any burning or looting during the Martin Luther King assassination and to this day, I contributed that fact to my father’s leadership. Those that organized the Civil Rights Marches and Protest leaders, understood human nature to display anger, they understood the politicians, and they understood their own family members. We were more disciplined. We said Yes Madame and Yes Sir. We respected authority and leadership.

My father understood the power of being political. I can’t tell you how many political campaigns my father contributed his time and money to. My father took me door knocking and had me helping to pass out campaign literature for Barbara Jordan and Lyndon Bean Johnson. 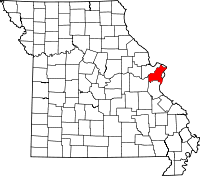 Let’s look at today and let’s use the City of Ferguson that is some 25 miles west of the City of St. Louis proper a.k.a. Saint Louis County. And let’s study and understand the St. Louis Political Demographics

Disclaimer: The numbers used here come from the Saint Louis Budget, the web site for the City of Ferguson and Wikipedia. (The search for this information was St. Louis Political Demographics; and I had a lot of reading and researching to do.)

According to the St. Louis Political Demographics, the Governor of Missouri is Jay Nixon and he is a Democrat! The City of St. Louis and St. Louis County covers some 1 million people. There are 90 municipalities. There are 24 school districts, 24 Fire Protection Districts. St. Louis County has 7 Council Districts, 5 are Democrats and 2 or Republicans. The political demographic is made up of 71% white and 23.5% black; the rest are non-black minorities. The County is served by a County Executive (Charles Dooley) who is a Democrat. The Prosecuting Attorney is Robert McCulloch is also a Democrat!

The City of Ferguson Political Demographics 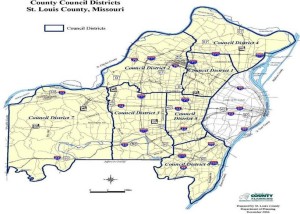 According to the St. Louis Political Demographics, the City of Ferguson is 6.5 square miles wide with a population of some 25,000 people. Ferguson is 70% black. There are 53 police officers serving Ferguson 3 of which are black. The only Black St. Louis District Council member serves District 1, which covers the City of Ferguson; her name is Hazel Erby and she is a Democrat. James Knowles, III is the Mayor of Ferguson; he is a Republican. Ferguson has one High School and on average it serves 3,000 students for grades 9-12 each year. Ferguson has 3 Wards with two City Council members serving each Ward. Ferguson has one City Manager; his name is John Shaw he is in charge of the City Administration for the local government.

Each of St. Louis County’s 90 municipalities have primary responsibility within their jurisdictions for services such as public safety, planning and zoning, local street maintenance, and building code enforcement.

The unincorporated area, which contain nearly a third of the County’s population and a third of its area, comes under the direct jurisdiction of County government.

According to the St. Louis Political Demographics, on August 5, 2014, the State of Missouri held a Primary Election for members of Congress, County Executive, and City Council Members.

Steve Stenger who is white and a Democrat, was the person that challenged the County Executive received the endorsements of most all of the unions including the Fraternal Order of the Police and won the Democrat Primary Election…that is according to the St. Louis Political Demographics.

According to the St. Louis County Board of Elections, only 661,393 of the 1 million(+) residents were registered to vote in this Primary Election and of that number only 29% voted on August 5, 2014. That means that in all of St. Louis County of 1 million people, only 192,501 people voted.

In all of St. Louis County, on August 5 (The 2014 Missouri Primary Election Day), the first black County Executive (Charlie Dooley) a Democrat lost to a white City Council Member ( Steve Stenger) also a Democrat that represents District 6. Of the 192,501 ballots (votes) Dooley received 39,038 votes or 30.50% and Steve Stenger received 84,993 votes or 66.46%. There was one other candidate but he only received 3% of the vote.

In all of St. Louis County, on August 5 (The 2014 Missouri Primary Election Day), the Prosecuting Attorney (Robert McCulloch) a Democrat who did not support or endorse the black County Executive won the Primary Election with 84,023 total votes; that’s 71.36%. His challenger, Leslie Broadnax received 33,720 votes or 28.64% of the total votes for the Prosecuting Attorney. 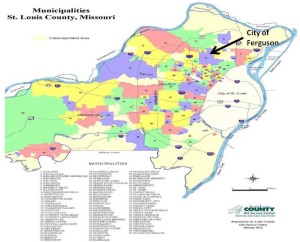 However, the Board of Elections records show that there were 24,013 people registered to vote living in Ferguson and of the number of registered voters, on August 5, 2014, only 6,199 people voted! That’s a little under 12% of the registered voters!

Fact, Robert McCulloch has held the position of Prosecuting Attorney since 1991. This means that the majority of the St. Louis County voters voted for him because he won the 2014 Primary Election!

It appears that although the voter turnout in Ferguson was dismal, the numbers don’t lie…the voting majority sent a message to the political leadership. They did not want the incumbent City Council and Prosecuting Attorney to be re-elected!

On August 9, 2014, a white police officer shot an unarmed 18-year-old black man some 6 times. The Fraternal Order of Police is a traditional “liberal” Democrat organization stands by their officer. At the posting of this blog, some half million dollars had been raised for the police officer that shot the unarmed young black man 6 times. A fund-raising effort that exceeds the funds raised for the Brown Family although the Alpha Phi Alpha Fraternity is paying for the funeral arrangements for Michael Brown.

A Democrat Governor (Jay Nixon) ordered a curfew and the National Guard and has not traveled to St. Louis to console the residents of Ferguson; nor has he met with the political leaders in person to bring some leadership to the situation. According to the Mayor of Ferguson, James Knowles, III since the police officer gunned down Michael Brown on August 9, 2014, no one contacted him from the governor’s office, the county executive’s office, or the city council.

A Democrat Prosecutor (Robert McCulloch) with a shady track record when it comes to prosecuting blacks, whose father was allegedly killed in the line of duty by a black man, is working with a grand jury made up of 9 whites and 3 blacks, made the statement that the federal government has no power to remove him from the case. He further stated that only the governor can remove him and he added that it is going to take 9 of the 12 grand jury members to indict the police officer that gunned down an unarmed black man. Bold?

According to news reports, the grand jury could take as long a mid-October-2014 to rule on the evidence presented in the case of the police officer (Darren Wilson) who gunned down an unarmed black man (Michael Brown) in the City of Ferguson on August 9, 2014. According to news reports, nothing presented to the grand jury will be made public and no cameras are allowed during the session.

There you have it, the St. Louis Political Demographics!

Do you find this information as interesting as I do?

The General Election is November 8, 2014. I wonder what the turnout will be then.

Hello leadership? It is time to register write-in candidates or for candidates to change their party and re-enter the race and you need massive voter registration and education.

Click Here to contribute to the Legal Fund for Justice for Michael Brown.