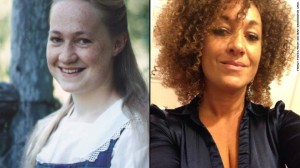 Before we begin, let me make something perfectly clear about me. I am an American born citizen born black with two black parents. I do NOT identify as African American because I was born in America and have never been to Africa. In fact, according to Ancestry and my DNA, to find an African slave in my bloodline I would have to go back as far as the 1800’s. My Great-Grandfather on my father’s side was white. My grandmother on my mother’s side was white and Cherokee. My birth certificate says I am a Negro, which means black in Spanish.

Recently, the world woke up to a news story that is still trending on Twitter (#transracial), being shared hundreds of times throughout Facebook and other forms of social media, and was discussed and/or made fun of by talking heads and stand up comedians everywhere.

The news? A Caucasian born American woman, who had become the President of the Spokane Washington Chapter of the NAACP, had been passing for black for several years was exposed by her parents as deceiving everyone because she is white.

Her parents, both white Czech and German mixed ousted their daughter for disowning them while she lived a life as an African American woman. Her name is Rachel Dolezal.

After her parents revealed her racial secret, a news reporter walked up to her and popped the question are you African American? Her face went from a beautiful smile to a shocked speechless look of a person that had clearly been caught off guard. She said: “I don’t understand the question.” Within seconds, she walked away from the camera and the questions.

Don’t get me wrong, I am not writing this blog to speak negatively about Rachel Dolezal. Had she been truthful about who she is (a white woman), and been elected to lead the Spokane NAACP, I would have nothing to say. In fact, this would be a non-issue. It would not even be newsworthy. She miss-led everybody. She asked her adopted step-brother who is black to help her promote the lie (if asked) that the two people that are her birth parents were not their parents. That is intent. She even lied on the Spokane NAACP Facebook page that the black man in the picture is her birth father.

She is (was) not only the president of her local NAACP chapter; she is also an academic expert on African-American culture and is employed to the Eastern Washington University to teach many African cultural classes under the Africana Studies Program at the University.

According to its web site, “The Mission of the Africana Studies Program at Eastern Washington University is committed to student success. As such, Africana Studies provides students with a rigorous and comprehensive curriculum that allows students to critically explore, analyze, and interpret the experience of African Americans in particular, and other people of African descent in general. The minor in Africana Studies helps to prepare Eastern Washington University students to be broadly educated, articulate, critical thinkers ready to pursue meaningful careers as engaged citizens in a culturally diverse world.”

Can an Ivy League degreed white woman lead the NAACP? In 1909, when the NAACP was launched as a Civil Rights Organization, there was at least four white women that help W.E. B. Dubois create, form, and organize the civil rights organization. Mary White-Ovington, Inez Milholland, Jane Addams, and Fanny Garrison-Villard did not hide the fact that they were white and members of the Republican Political Party.

Yes, a white woman can lead the NAACP. Hispanics have been leaders of the NAACP. As Rachel’s brother put it, she is intelligent, has done some great things for people that identify as African American, and was elected by the predominantly African American (Black) membership of the Spokane NAACP to be their leader.

According to the NAACP Leadership “One’s racial identity is not a qualifying criteria or disqualifying standard for NAACP leadership,” the group said. “The NAACP Alaska-Oregon-Washington State Conference stands behind Ms. Dolezal’s advocacy record.”

That makes her a leader that is able to stand up for complex and controversial issues affecting African Americans. In a few years, had she not been caught in her bed of lies, she could have run for City Council or a higher political position in Spokane and won based on her accomplishments within the black community. She did not have to lie or miss-lead so many.

To add insult to injury, Rachel Dolezal told the world in a television interview that she identifies a black and that she is TRANSRACIAL. Now that her deceitful scheme to pass as African American has been exposed, she has launched a new identity; TRANSRACIAL who is also Bisexual.

In a news report/television interview, Rachel Dolezal challenges assertions that she’s been deceptive, insisting, “It’s a little more complex than me identifying as black or answering a question of being black or white.” “The discussion is really about what it is to be human,” Dolezal said. “And I hope that that really can drive at the core of definitions of race, ethnicity, culture, self-determination, personal agency and, ultimately, empowerment.”

Right behind her TRANSRACIAL identity came the commonality she claims to have with Bruce Jenner when he became a transgender with a new name: Caitlyn Jenner.

Some people are even buying into and agreeing with referencing this vitriol in the context of Caitlyn Jenner, whose transition from Olympic champion Bruce Jenner to a woman. First of all, Bruce never lied about being a man that wanted to become a woman because he felt more like a woman than a man. We watched as he made the transformation public so that the whole world could see him as he transformed. That is nothing close to what Rachel Dolezal did.

It appears she figured out that in her role as mother, community leader, and educator, it would be best to pass as African American. And that is the decision she made. Once that lying seed was planted, it grew and one thing led to the other. 1) Telling her step brother to help her deny their parents. 2) Pretending that her step-brother was her son. 3) Claiming that a black man was her father, with no mention of her real white father or white mother. 4) Continuing with her employment as a professor of Africana Studies. 5) Campaign against others to become President of the Spokane NAACP (Trust me; I know how hard that is to do). 6) And now she wants to be known as a TRANSRACIAL human!
Okay, so now what? Do we ask Congress to modify the 14th Amendment to include all these new identities?
The Fourteenth Amendment (Amendment XIV) to the United States Constitution was adopted on July 9, 1868, as one of the Reconstruction Amendments. The amendment addresses citizenship rights and equal protection of the laws, and was proposed in response to issues related to former slaves following the American Civil War.

Can I study and collect artifacts belonging to the Cherokee Indians and one day claim that I am TRANSRACIAL because I identify with Cherokee? Can I say that I am Caucasian because the blood runs through both sides of my immediate blood line even though both of my parents were Black?

In a news article, Rachel admits that the controversy, especially the timing of it, caught her off guard. But her hope is that some good comes out of it, if it changes how some people think about identity.

She’s right! All that has to happen now is for her to be fired by the Eastern Washington University, and watch a sympathizing legal group step in and help her take the issue all the way to the Supreme Court and one day soon, our children will be able to Identify with and become any race they desire and flip-flop as often as they want to because the seed was planted by Rachel Dolezal.

This story is not over.