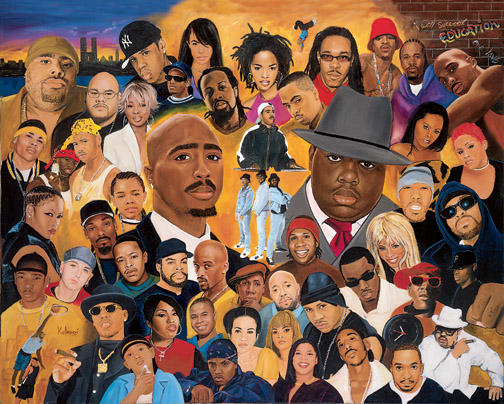 Let me get a few things out of the way before we begin this dialog. NUMBER – 1: This is a beautiful picture of some of the most talented young black people who became famous because of their ability to use words in rhythm to share experiences affecting their lives that has ever lived. Kudos to the artist that put this picture together to whom I credit at the end of this blog post.

Number 2: Although they all are very smart and became self-sustaining, most of the people in this picture is either dead, been to jail, or have a criminal past.

Number 3: In order to be famous, every person in this picture had to be or pretend to be a bad boy or a bad girl.

Number 4: I would love to interview a few of these people because I have a strong feeling that their definition of happiness is not what they rapped about in their music.

And Number 5: I am certain that none of these talented young folk taught their children to live the life they rapped about.

Now having qualified those things, when death, violence, sex, speed, drugs, and failure have been glamorized to the point that they only way to make money is to shed blood, add sex, spew anger, and promise revenge, then what should we expect of the generation that received this ugliness?

It takes about ten years for something that have been sowed into culture to cultivated and become reality in the people they birthed.

Now two generations are messed up. The children that grew up listening to these hard-cord hip-hop rappers did not have the economic resources that these people had after they broke into this business.

Besides, the five points I make above, the difference between these rappers and the average person that listens to their rap is the rappers of the 80’s & 90’s generation received an education that taught the English and comprehension using phonics. Yes, I am saying that the rappers in this picture – the very ones that set the hip-hop scene into play for the current generation, received an education that taught them to comprehend, be self-learners, and read fluently. Their education system included real math, arts, and music. Their education system included proper penmanship and a facsimile of business etiquette and relationship management. These rappers were exposed to teachers that could create their own classroom syllabus, curriculum and instruction, and learning resources without state mandates. If any of these rappers when to college or attended an university, their professors were not politically bias and did not care whether they were a boy or or girl, they wanted excellence!

You may have heard the word “Nigger” as a term of endearment and on occasion it was used to demean another man who lived in opposite of the rapper’s expectation. The “F” or M-F word was use to put emphasis on a topic or in place of an adjective. Rarely did one of these rappers call a woman a Bitch or a hoe unless it was to face off on someone else calling their mother, sister, or girl one of those names. Are you getting my point? These were rappers not of the now hip-hop scene. Do not get it twisted. There is a difference. You only have to know the names of the artist in this picture and really know their rap to know their message. They did not consider themselves hip hop artist. These were rappers that properly used the King’s English even if it dropped the “F” and “N” word for emphasis. (no pun-intended)!

The education system is what happened.

All of a sudden, schools in the majority black community did not teach art or music unless the school taught art and music as a workforce development skill associated with outcome-based education.  All of a sudden, schools in the majority black community did not teach phonics based English, reading, and math; some schools did not teach reading at all, and don’t even ask if they taught reading comprehension.  No, most of today’s elementary and secondary students were talk to see the picture and say the word and they were not taught to comprehend the meaning of the word nor were they taught to explain what they just read in a sentence. You know the difference by the way the the child sound when they read. If they sound like robots – they were not taught to read nor comprehend and they were not phonics taught – they received ‘direct instruction’. While you were told that our children were getting smaller class size so that they could receive better direct instruction from the teacher…what you got was a teacher having to tell your child what to do step by step because he or she could not figure it out for themselves. This is why in the early 90’s McDonald’s had to put their food items on the cash-register keys because your child could not figure our change. This is why when you tell Johnny to sweep the floor, he does just that; he swept the floor. When you return, their is a pile of dirt where you told Johnny to sweep. You did not tell him to sweep, pick it up, put it in the trash, and empty to trash…step by step.

So what does that have to do with the Hip Hop industry, you ask? If the rappers of the 1980’s and early 90’s rapped about things that affected their family, community, and general life, then when the education system was dumb-down in the majority minority communities, rap turned hip-hop could only rap about what they knew, which was nothing.

They had not learned anything. Most of today’s rappers do not even know how to have clean sex. I am not talking about the 1990’s rappers that turned Hip Hop with the trend of the new style of rap. I am talking about the jokers and female wannabe’s that are not yet 30 years old today. Listen to their lyrics and to their rhythm say these words… “see spot run”.  All of their beats  sounds like they had a second grade education. Therefore, since all they know is what little they have experienced, their rap lyrics reveals the limit of ability to make music to your ears. Now factor in the fact that the industry itself helped make bad music because hard-core sells and you have yourself some horrible music going into the brains of this new generation only to guarantee that the next generation will be worse than ever.

My father used to tell me that he could tell what I was thinking by the type of music I listened to…that was true for me in the 70’s and it is true today. How education destroyed Hip Hop! Its the education system, stupid! That is the root of what is learned and what is the outcome.

What effect does this failed outcome based education system have on the family, the economy, and our culture?

Let’s talk about it.