Baby Eagles welcomed by their parents; My Pet Eagles!

CLICK HERE to read my blog about how I fell in love with “My Pet Eagles and their baby eagles!”      I am not the specialist. I am using my blogs to bring more attention to these magnificent birds by sharing my affection them with you.  I cannot provide daily updates. My goal is for you to start following these birds yourself.

Blog: Baby Eagles Welcomed By Their Parents – My Pet Eagles

Blog: Eagles Rescued in DC is a Story of Heroism and Love

Blog: Honor and Glory are the names of the two baby eagles!

Below is the story of Mr. President (Dad/Mr. P) and The First Lady’s (Mom/TFL) baby eagles; hatched during their 2017 mating season. (NOTE: All pictures and video content is copyrighted material belonging to the American Eagle Foundation (AEF). 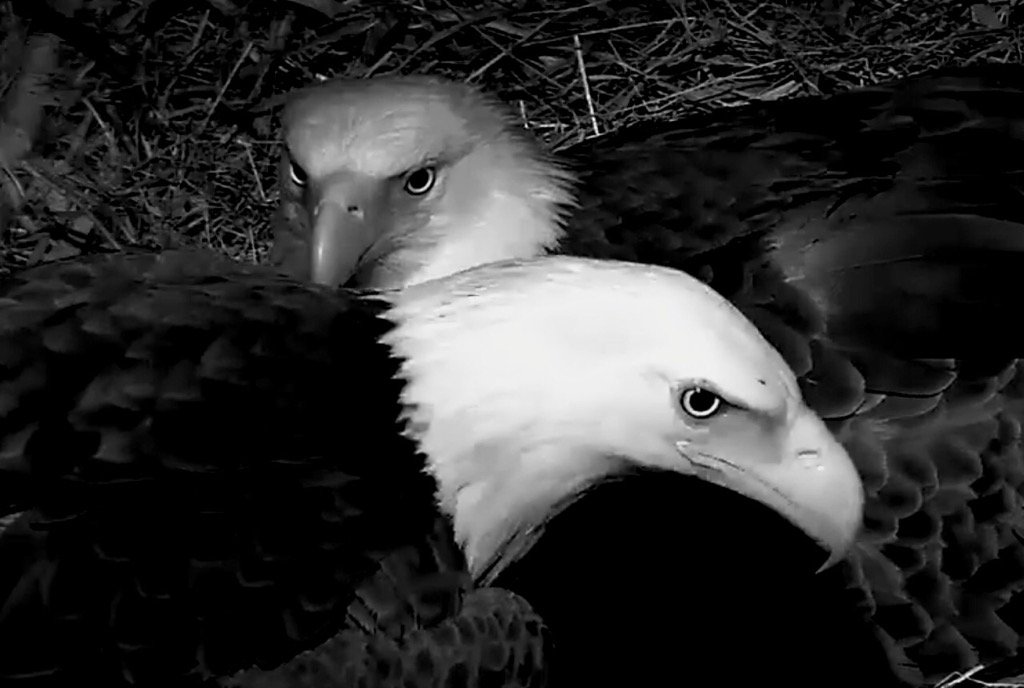 Tuesday night, March 28, 2017, baby eagle a.k.a. DC4 begin to PIP its egg shell. The rest of the night, it pipped, pipped, and pipped until it cracked through and hatched. This baby eagle kept its mother up all night checking to make sure it made a safe arrival during the 12-hour hatching period. 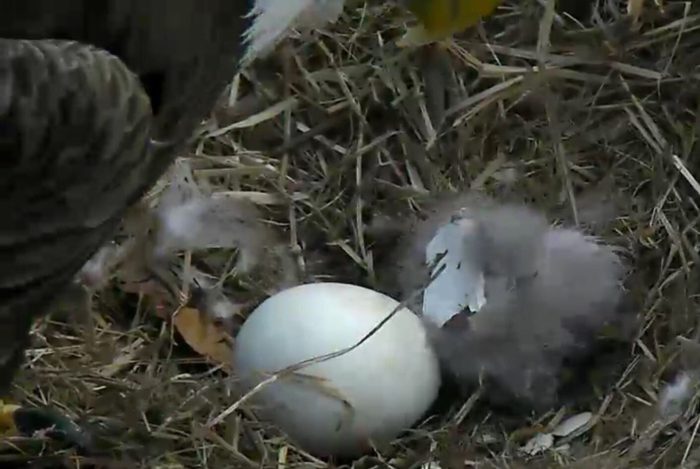 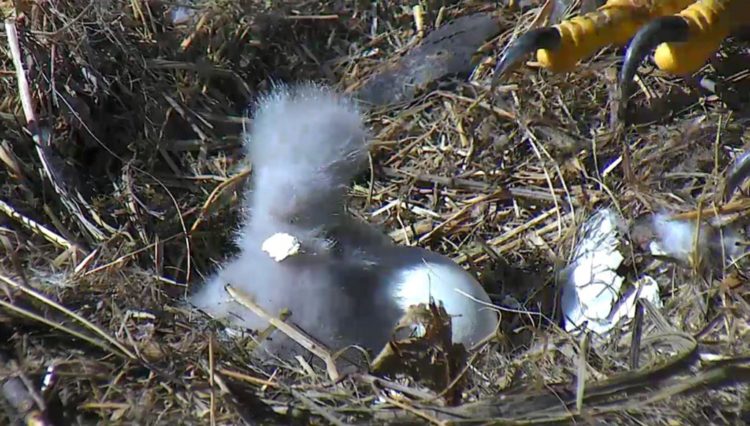 Hello DC4. We welcome our newest baby eagle. Fresh out of its egg. Face had not formed.

At 7:21am, Wednesday, March 29th, baby eagle (DC4) completely hatched. It looked like a grey cotton ball with a tiny prick of a beak with no mouth or eyes. We could hear chirping but we could not see its mouth until around 9am when baby eagle had a tiny face seen here laying in the sun on its unhatched sibling’s egg. 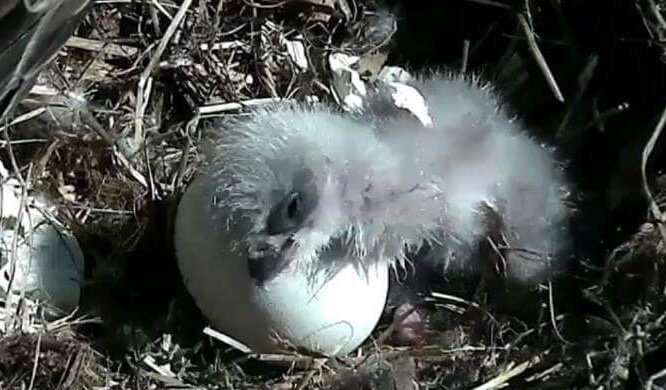 Hours after it hatched, baby eagle (DC4) rests on the unhatched egg of its sibling. 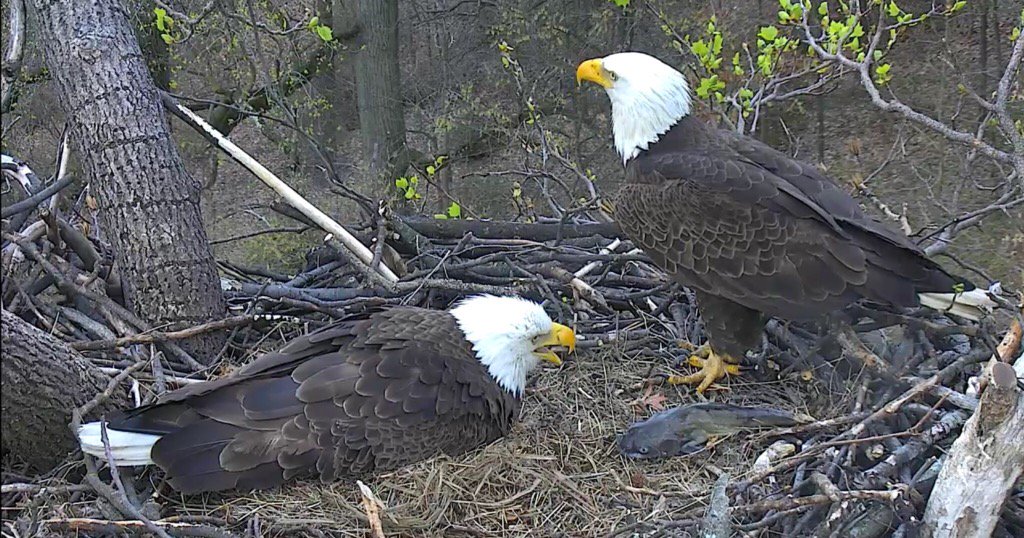 Mr. P will keep food in this nest until the baby eagles leave the nest. 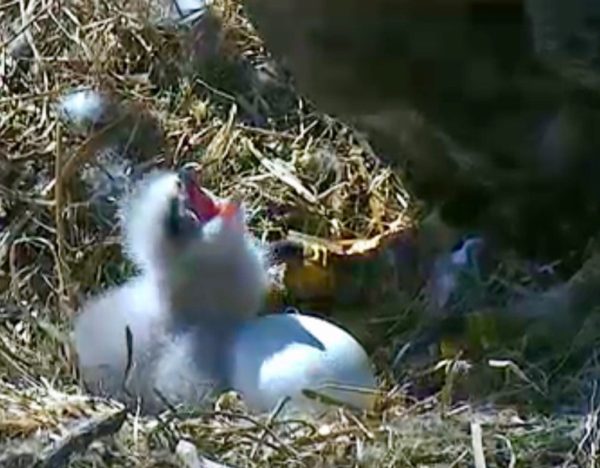 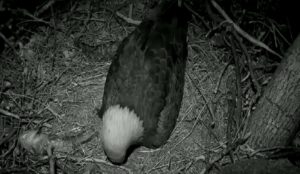 Finally able to get a good nights sleep after the arrival of baby eagle (DC4). Incubating unhatched egg DC5. 30March at 1:30am

Last month (February/2017), I posted a Blog Post entitled: “My Pet Eagles – A Virtual Experience!”. The blog details how I fell in love with this pair of mated Bald Eagles that in 2014, nestled in a beautiful landscape inside of a pristine park located in the Northeastern section of Washington, DC; known as The Arboretum.

Click Here – To read my blog about my virtual experience with my pet eagles; Mr. President (Mr. P – the daddy eagle) and The First Lady (TFL – the mother eagle).

If you are interested in learning more about the processes for how these two eagles incubated and cared for their two eggs, Click Here.

The purpose of this blog is to highlight the major events associated with My Pet Eagles and their baby eagles laid and hatched during the 2017 Mating Season.

It is also my goal to drive traffic to My Pet Eagle’s web site. I will update this blog with pictures and videos that show how these two cute baby eagles grow up in the nest together.

March 30th 31st – both baby eagles have hatched and nurturing has begun. 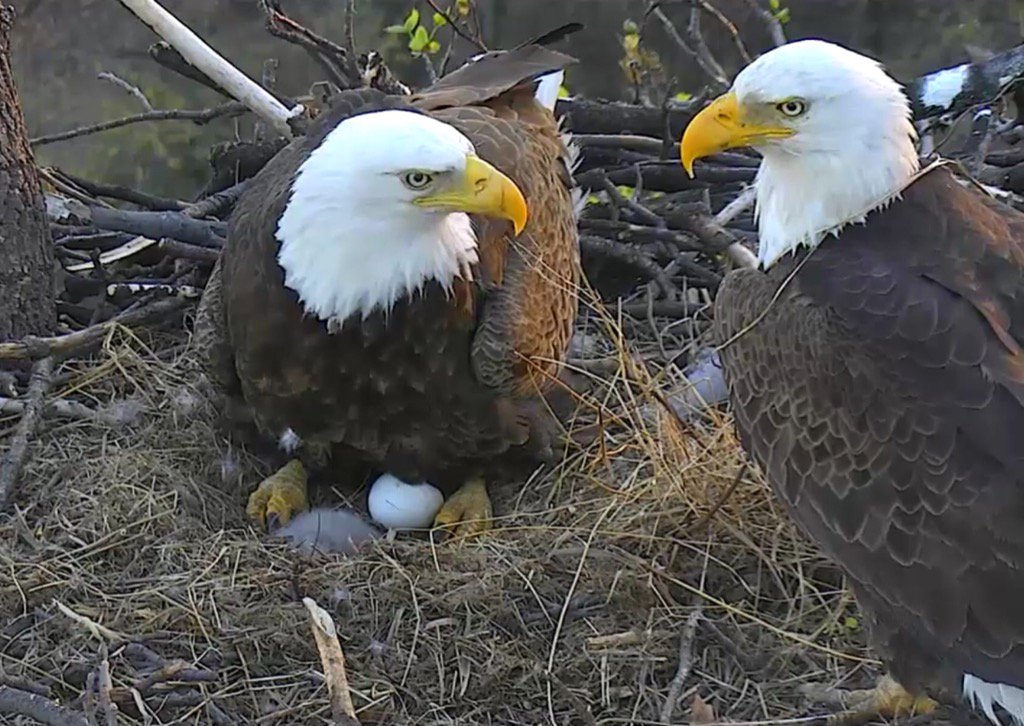 Now that parents are certain that by this time tomorrow, mom and daddy eagle discuss care taking, hunting, and feeding shifts. 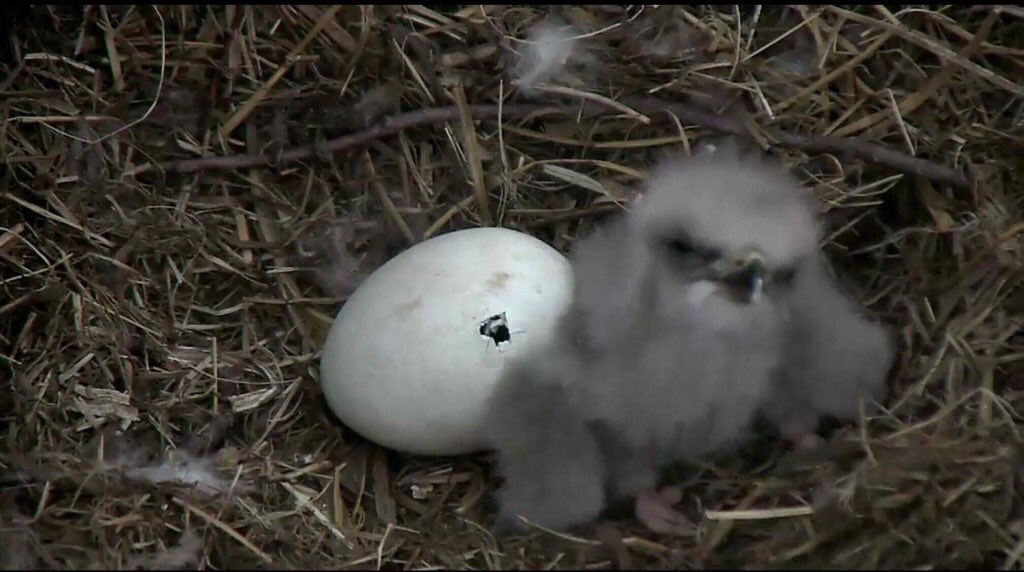 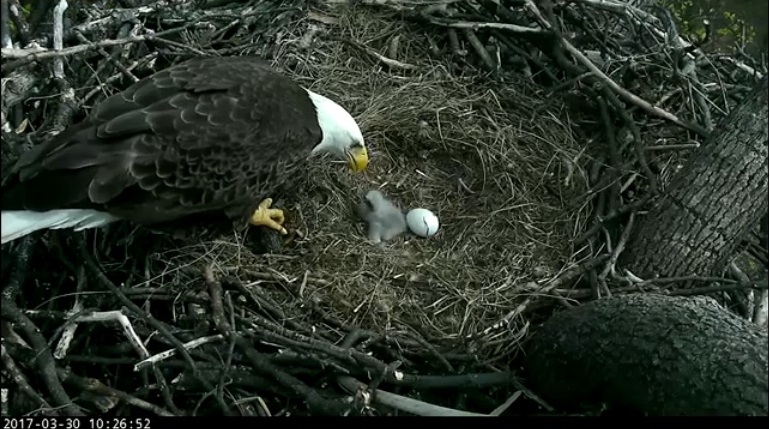 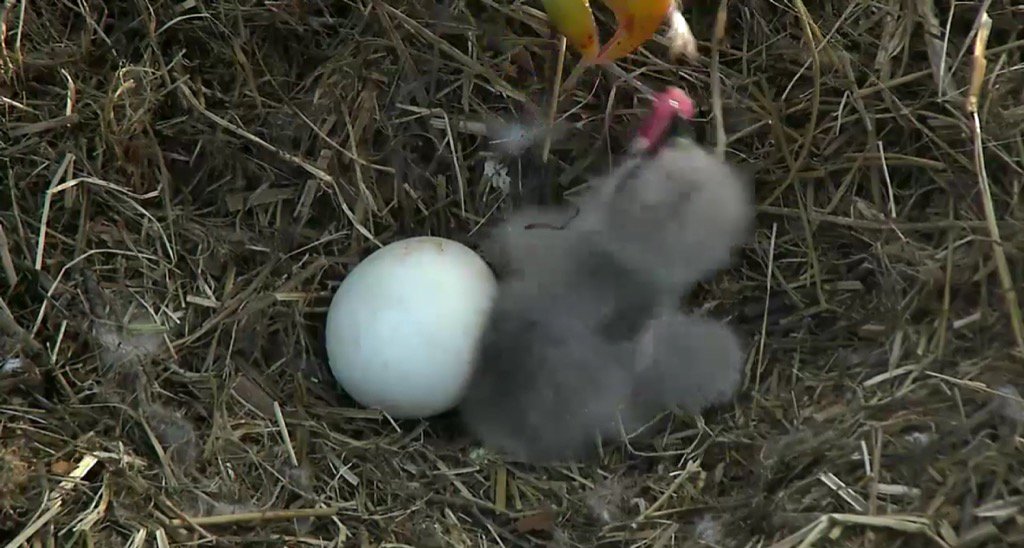 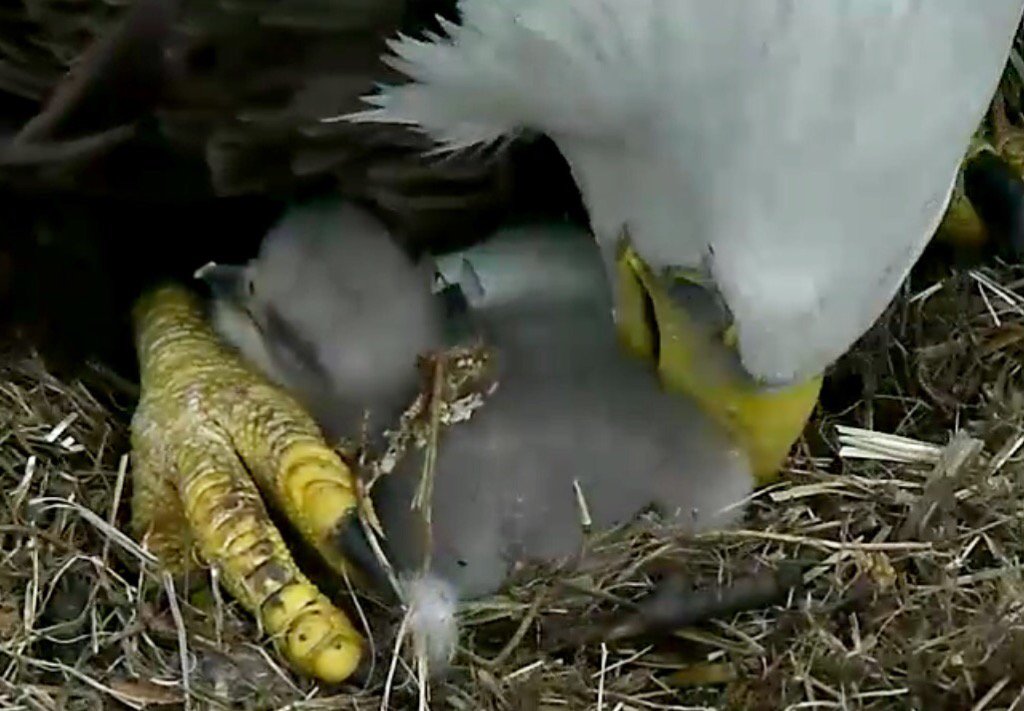 As vicious as this predator hunter is, look at how gently he holds his tiny young baby eagle that is barely 24-hours old. The love these parents show each other is an example for all humans. The sensitive nature by which they are able to raise their babies should be the blueprint for every parent. In 2016, I was awe struck at how these parents provided for and disciplined their two baby eagles DC2 Liberty and DC3 Freedom. I know what to expect this year with this family. I understand why the Bald Eagle is America’s Iconic bird. – AMAZING! 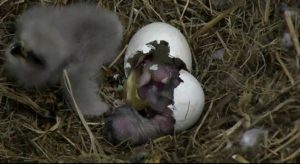 DC5 hatched March 30th. It looks like it has no fur. But its face is completely formed. (Copyright AEF) 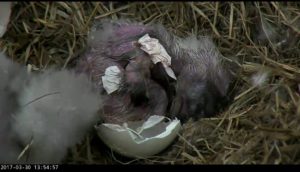 Unlike its sibling, DC5 hatched with both a formed face and body. This baby eagle appears to be puny; but somethings tells me that it will grow up to become a strong and powerful Bald Eagle. (Copyright AEF) 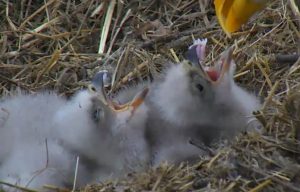 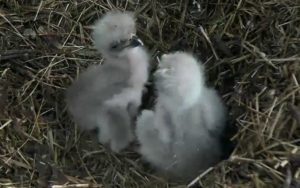 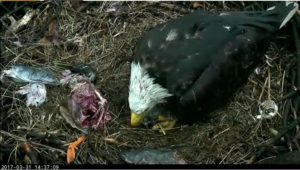 Daddy stays in the nest to keep the baby eagles warm during a chilly spring rain. The nest is a mess. It is loaded with plenty of fish and a duck. (Copyright AEF) 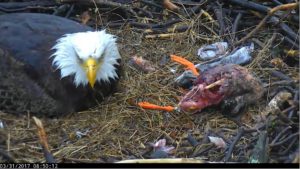 Mr. P brings home fish and game meal that he catches. Look at this nest! The baby eagles are 3 and 2 days old. Its March 31st. It pouring down rain. There’s two kinds of fish. Not only does he kill the duck, but he plucks the feathers before he brings it into the nest. from now until the two baby eagle ‘Fledges’ and flies away to start a life on their own, which will be around mid-July; these two will be fed by their parents. (Copyright AEF) 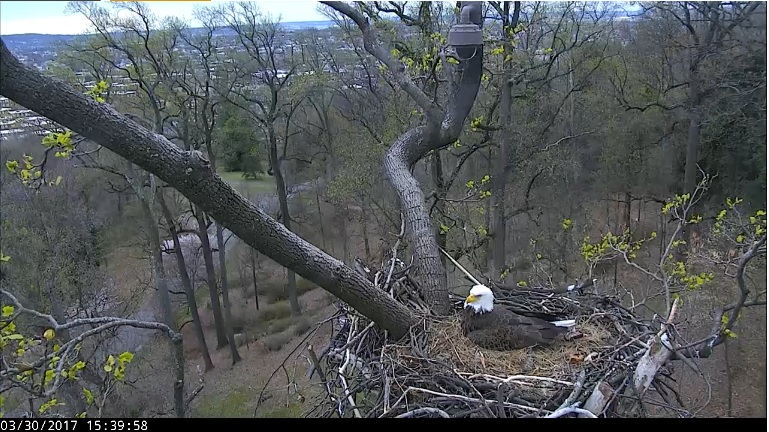 This is the awesome view this mated Bald Eagle pair and their baby eagles have of their surroundings in the Arboretum. 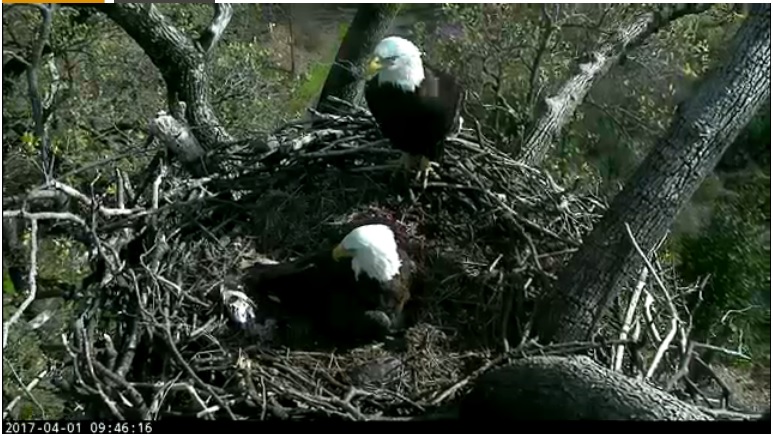 The rain has passed. Almost all the food have been consumed. The two baby eagles are underneath the daddy. Mom is resting. They are probably discussing hunting and shifts. (Copyright AEF) 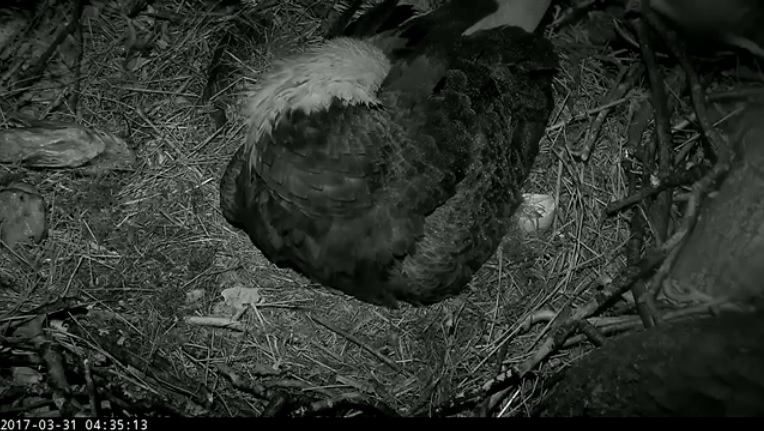 Protecting his babies, daddy eagle is sleeping in one of his many sleeping positions during a rainy spring night. (Copyright AEF)

From this point onward, both parents will rotate incubating their baby eagles, they will both hunt and make sure food is available for round the clock feedings until both baby eagles permanently leave this nest, which will be sometime this July.

Both parents will eat solid meat from the food they provide for the nest. The soft or more fluid innards of the animal or fish caught for food is fed to the baby eagles until they are able to eat solids just like their parents. These birds get their water from the moisture in the food they eat.

The parents will protect their baby eagles every day and night from weather, insects, other predators, and each other. These birds are hunters, they are vicious, they are predators, their parents will discipline and keep them from being competitive against each other for attention and food.

These parents will administer a healthy dose of discipline when their baby eagles make any attempt to overthrow their authority.

I will not be able to post a blog every day. I invite you to engage in and participate in watching this pair raise their two babies. Click Here and Bookmark the website for the DCEAGLECAM The CAM is on 24-hours a day. At night, it uses infrared to help us see clearly; however, there is no light to disturb the family. We hear the environmental noises around the nest and we hear the sounds these eagles make. We learn how they call each other. How they discipline their baby eagles becomes moments that you want to share with people you know.

I recommend you share this information with people that you know that have children, with teachers that teach animal behaviors, and to the sick and shut in that need something positive to look forward to in their lives.

Because there is too much day to day activity to monitor, I am not able to post daily blogs. My goal is to share information about the virtual experience I have with My Pets.

Going forward, I will provide updates for major events or activities involving this family.

Please sign up for educational chats. Please donate and support the American Eagle Foundation. These Eagles start their day at day break and they go until they bed down for the night; generally around 10:30pm EST.

Special Note: The baby eagles are known as DC4 and DC5 because of the numerical order in which they were born. Last year 2016 was the first year that the American Eagle Foundation used an Eaglet Naming Contest that resulted in naming DC2 and DC3 Liberty and Freedom. This year a naming contest has already started. NOTE: Thank all that participated the Naming Contest for this pair of eaglets. The first round of naming DC4 & DC5 has now ended. The top five name pairs will be released for a final vote to the public on April 24. I will post an update then.

To get familiar with these lovable baby eagles, read my blogs.

In the meantime, please consider supporting the DC Eagle CAM by purchasing this TeeShirt.

Thanks to @dceaglecam, @eaglesdotorg, all of the many sponsors and government agencies, and to all of the volunteers who spend countless hours monitoring the CAM 24-hours a day, conducting the education chat sessions, and for they do to make our experience with these mated Bald Eagles and their precious baby eagles memorable and enjoyable.

My Pet Eagles – A Virtural Experience!
Eagles Rescued in DC is a story of heroism and love!