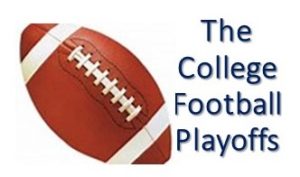 Its the Cinderella Team feeling you get when underdogs rise to the occasion and do something no one thought they could.

Just like the Kansas City Royals became the 2015 Major League Baseball Champion on their second attempt.

Just like the Cleveland Cavaliers rose from waiting decades to win NBA Finals Championship, which they did when they beat the 2015 NBA Champions, the Golden State Warriors, in 2016.

Somethings you just know. Now that we know Alabama beat Washington to play the winner between #2 Ohio State and #3 Clemson, and before I head out to be with my family for the 2017 New Year, allow me to share with you why, I have faith in the Buckeyes!

If we’re not a fan of college football but kept up with the end of the 2016 season of the AFC-W NFL news, I would have supported #MichiganUniversity if for no other reason except for the fact that last year their Coach Jim Harbaurgh who is also the brother of the Baltimore Ravens (Coach John Harbraugh) was “released” as the head Coach from the San Francisco 49ers just before the 2016-Playoffs.

With all eyes on Harbraugh hoping that he would lead his college football team to the 2017 Collegiate Championship Game, for me, I took the fork in the road leading up to this game because my favorite football team (The Dallas Cowboys) selected  #EzekielElliott from #OhioStateUniversity as their 2016 4th Round Draft Pick as #RunningBack.

I studied how First Year College football Coach Jim Harbraugh for #MSU recruited the more wealthier southern raised well fed huge elites over the more regional working-class from Michigan, Chicago, Wisconsin, etc… strategy that got them to the Number 3 spot in the NCAA Division.

Robert Wilton Speight III, became the QB for MSU in 2014; almost two years before Jim Harbraugh became the team’s coach. Speight, the  2014 Under Armour All-America Game team captain. His father and grandfather both played basketball. He played football for a collegiate high school in Richmond, VA. The arrival of Jim Harbraugh created a series of QB schisms. In this game, Robert Wilton Speight III is a Sophomore QB at MSU. https://en.m.wikipedia.org/wiki/Wilton_Speight

I watched Urban Myer, hired in 2011 to be the football Coach for #OSU with the highest winning average over all previous #OSU football coaches. I watched Coach Myer make J.T. Barrett a young black “all-star” from Wichita Falls, TX his Quarterback in 2013.

However, J.T. Barrett only missed being the winner of The 2015 Heisman Trophy because during the 4th quarter of that game the MVP broke his ankle – causing OSU to miss out on the 2015 championship opportunity. J.T. Barrett was not supposed to be able to play football this year but he did as Jr QB for OSU.

My list is long as to why I cheered for OSU to win today’s NCAA Divisional Football Game.

The main reason I cheered for OSU to win over MSU is because of the elitist behaviors led by Coach Jim  Harbaugh. He is known for yelling at Football Officials and Referees when he was the 49’s Coach and he hasn’t changed since becoming MSU’S Coach.

Fast-forward – OSU has beaten MSU since the 108th game in 2011. If MSU’S new Coach Jim Harbraugh didn’t win a game; he is supposed to beat OSU…since he’s been Coach MSU, he played OSU twice and loss each game.

Instead of taking responsibility for the loss and possibly not making playoffs, Coach Jim Harbraugh did what he is known to do…blame the officials.

I fully intended to post this blog long before now.  In fact, I’d plan to post this before the NCAA Committee decided who would be in the Playoffs. I really thought that MSU would have been selected over OSU. When OSU was selected, it gave me another reason to believe that OSU had the horseshoe.

Today, Washington State loss to Alabama in the CFB Semi-Finals. Tonight, I am pulling for the Ohio State (Buckeyes) to win in a very defensive game over the Clemson (Tigers).