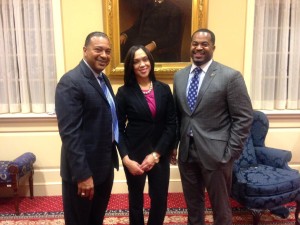 In March/2013 a member of the Dallas Police Department shot my cousin’s unarmed son seven times and killed him. His name was Clinton Allen. He was not committing a crime. He was walking a night wild black. He was a new father of twin babies. His grieving mother started what is now known as Mothers Against Police Brutality. Her name is Collette Flanagan.

I am certain, if you are a person of color and live in America, you or someone you know can attest to some form on police brutality. I am not broad-stroking every police officer. I have close friends and supporters that are police officers.

However, like most of you, I am worried and very concerned about the many cases across America where crimes against minorities committed by police officers have been allowed to go unchecked without being held accountable. In just about every case, the District Attorney/State’s Attorney have either refused to bring about charges, failed to obtain an indictment from a grand jury, and/or screwed up the case so badly with bad evidence or presentation that a jury acquits the officers involved.

I am writing you my Facebook friends, family, and Twitter followers because I want you to join me in prayer for the Baltimore City State’s Attorney, Marilyn Mosby, a 35 year old Black woman and mother of two children. As the prosecuting attorney, Mosby became an international star today, May 1, 2015, when one day after receiving the investigation report produced by the police and the report from the Medical Examiner’s office ruling the death of Freddie Gray a homicide, and after performing her own investigation, made the announcement that she was charging all six officers in the murder of Freddie Gray.

I have been watching and praying for all of the people involved in the police brutality case against the six police officers that have now been accused of various crimes against the murder of Freddie Gray, another black man that was walking wild black who dared to make eye contact with police officers who immediately profiled him.

Baltimore City State’s Attorney, Marilyn Mosby is taking on an old system that has deep roots in the code of silence and self protection. Six officers have now been suspended of their duties and have been charged and arrested for the role they have allegedly played in the homicide (murder) of Freddie Gray; a 25 year-old Black Man living in one of the poorest communities in Baltimore City.

Because of the National School Reforms promoted by the Clinton Administration 1992-1994, since 1996, of the 24 Districts, Baltimore City has been documented as the worst academic performing School District in the State of Maryland.

A drive through the EAST and WEST sides of the city looks like the city scapes straight of the movie ESCAPE FROM NEW YORK. Boarded, dilapidated, and redlined buildings where the poorest people live behind border roads that burned down 1968 that nearly burned down again on Monday, April 27, 2015 when through outside social media influences, led young people to leave high school to meet up at a mall to “purge” their community. No jobs, no future, no hope for most of the people that live where they are trapped. Yet, so many of current and previous politicians and community leaders became movie stars when they allowed HBO to film the movie The Wire.

Millions were made off the city and the city was left laying in filth and wasted blood like a gang rapped woman.

Baltimore City State’s Attorney, Marilyn Mosby is THE youngest Prosecutor in American and she is a Black Woman. She is standing on a life-long dream and what I heard her say today, she said this pass January when she was sworn into office in what was reported as a surprise election by the people of Baltimore City.

Listen to the speech she gave after she was sworn in. What she said today when she announced that she would bring charges on the six officers, she said in her campaign speech, which she declared throughout her campaign for the office. Listen to her speech when she announced she would bring charges against the six officers now arrested in the murder of Freddie Gray.

As this case moves forward, as the world watches and take note, let us be mindful that these officers are citizens first and deserve due process. While we hope for righteousness in the justice that we demand, let us pray for all involved. Please people remember to protest in peace without violence and malicious intent, and more importantly, let’s pray for the safety of the world’s newest rising star; the Baltimore City State’s Attorney, Marilyn Mosby.